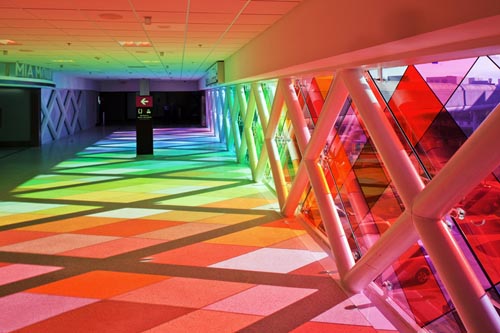 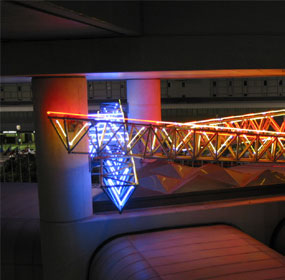 Drawn to new technologies and unconventional materials, Sonnier continues his exploration of the relationship between art and technology in Miami Heliotrope.  Suspended under the heliport at Miami International Airport, the massive neon-light installation involves a complex series of neon, metal structures, transformers, and electrical conduits transmitting, radiating, and reflecting light and color.

Stated Sonnier, “the dictionary defines ‘heliotrope’ as an arrangement of mirrors for reflecting sunlight from a distant point to an observations station.  The play of color, light and reflections of the artwork on the metallic ceiling and the surrounding structure creates a vital and impressive atmosphere which evokes the spirit of Miami... the city of sun.”

Born in Louisiana in 1941, Sonnier went to live and study art in France at the age of 24, later returning to the United States to earn a Master’s degree.  He soon began to sculpt, using elements of contemporary life such as neon, vacuum coils, vinyl and manufactured plastic. Sonnier has exhibited widely and is internationally known for his innovation with neon, fiber optics, and incandescent light.