Glenn and Lena Curtiss bought the land where Miami-Opa locka Airport is located in 1918 and in 1924 moved the headquarters of the Florida Ranch and Dairy Corporation to where today’s fire and crash station is located. After selling part of the ranch to the Seaboard Air Line Railroad and securing that a station would be built to serve the town, Mr.Curtiss founded the Opa-locka Corporation in 1925 and had architect Bernhardt Muller design a town in an Arabian Night’s motif, inspired by the success of the recently released film, “The Thief of Baghdad” starring Douglas Fairbanks. 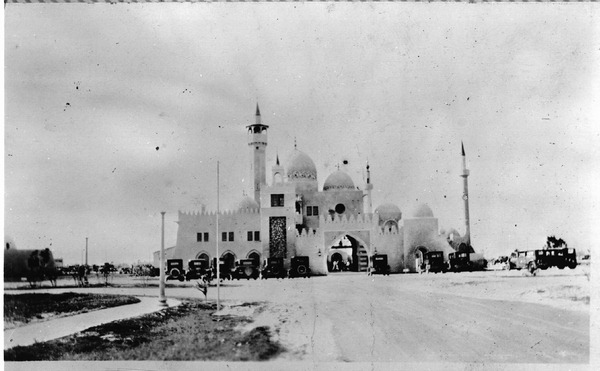 The first structure in Opa-locka was a fifty-foot Moorish observation tower that housed the town’s first well and real estate sales offices. This tower was located on the northeast corner of Cook’s Hammock, a grove of oaks that Mr. Curtiss preserved as a park. Since nothing had been built, salesmen took clients to the observation platform and pointed out the location of their future home sites. The foundations of this tower and the well-head are still visible next to what remains of the original 60 acre hammock.

Where today the airport sits Curtiss had urban planner Clinton McKenzie lay out Opa-locka’s country club section featuring an archery club with a swimming casino and a small private airfield for the Florida Aviation Camp surrounded by an eighteen-hole golf course and Cook’s Hammock Park. The opening of the Florida Aviation Camp in 1927, two years before Pan American Field, the precursor to Miami, International Airport, marks the beginning of aviation related activities at the site of Miami-Opa locka Airport. In 1929, the city of Miami bought a World War I blimp hangar located in Key West to house the Goodyear Blimp during its winter sojourn in Miami. The hangar was dismantled, its components carried north on the overseas railroad, and erected on the Florida Aviation Camp air field. 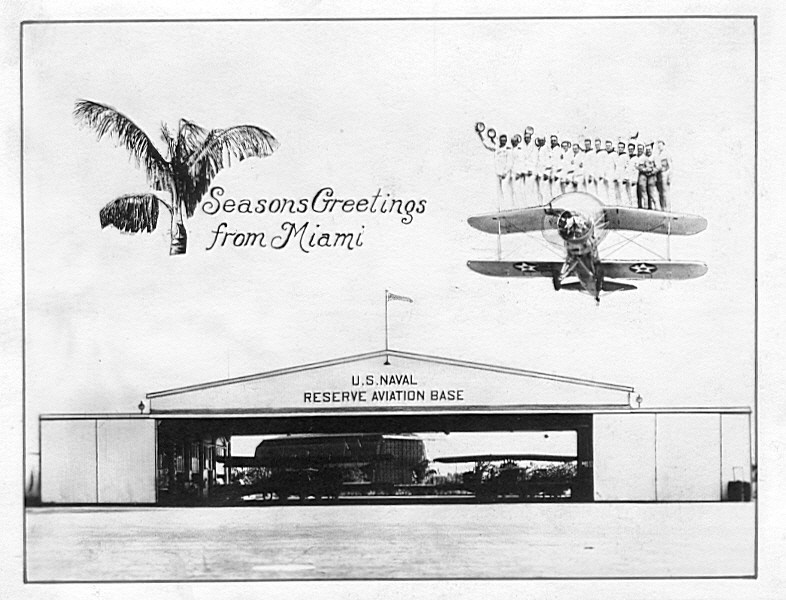 Before Mr. Curtiss untimely death at age 52 in 1930, he lobbied to have one of the nation’s first Naval Aviation Reserve Bases established in an 80 acre parcel north of the blimp hangar on land leased from the city of Miami. By 1939 this facility encompassed some 350 acres with a hangar, two paved runways and about a dozen small buildings, most of which still exist. 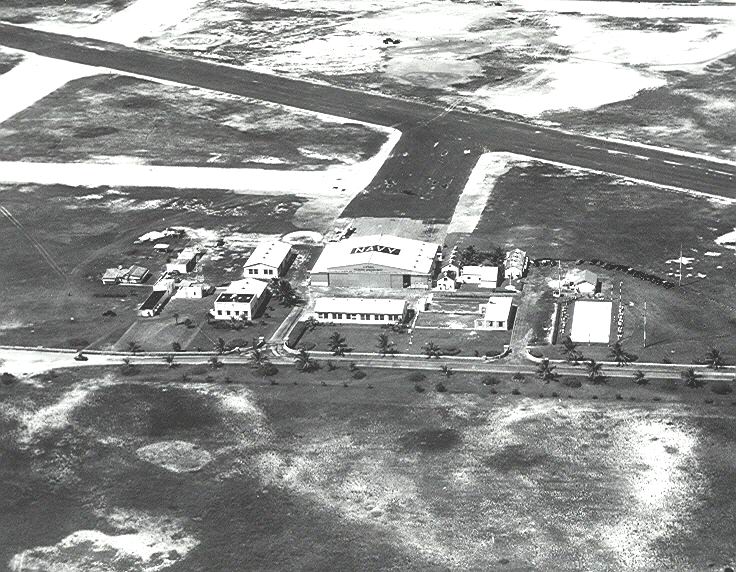 In 1933 the Navy built a dirigible mooring mast in the western half of the airport, adjacent to the Aviation Reserve Base. This was one of only five such installations around the United States. The U.S. airships Akron, and Macon and the German Graf Zeppelin all made well-publicized visits to Miami-Opa locka. After the departure of the Graf Zeppelin, a Cuban worker hired to secure mooring lines could not be found, prompting the first front page Miami Herald story about Cuban stowaways. The Hindenburg had received permission to dock here one week before it crashed. After the crash of the Hindenburg, the Navy determined that large zeppelins were too dangerous and the base was destroyed when the Naval Air Station was built. 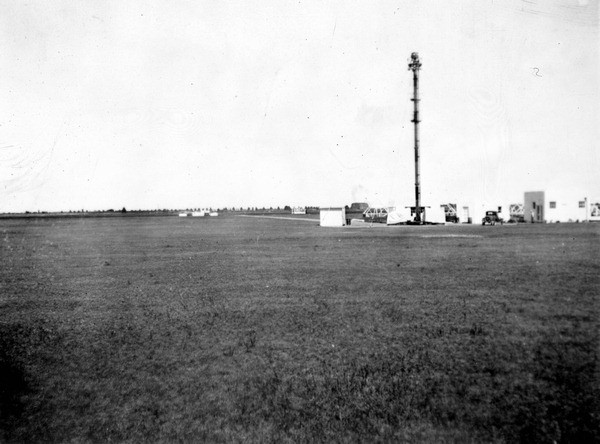 In 1940, the Navy undertook a crash training program for fighter pilots and acquired 1533 acres of Opa-locka to build a Naval Air Station. This site encompassed what remained of the golf course, the Goodyear blimp hangar, Cook’s Hammock and even the old Florida Ranch and Dairy Corporation farm buildings which the city of Miami had used as a work farm for indigents during the Depression. Robert and Company of Atlanta, then the nation’s second largest design firm, prepared a master plan for the base and designed the entire infrastructure, eight runways and almost 100 buildings. After Pearl Harbor, the Naval Air Reserve Base merged with the Air Station and by the end of the war Miami-Opa locka Airport had the general profile of today’s facility. 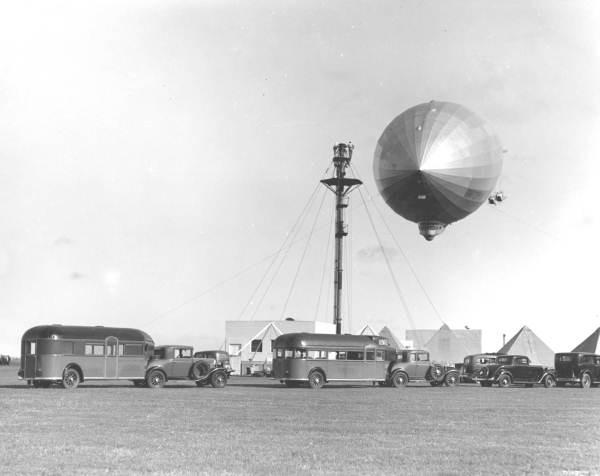 The Naval Air Station was decommissioned in 1946 and the Navy leased the airside to the Dade County Port Authority, who ran it as an airport, and the landside complex of barracks and warehouses to the city of Opa-locka, who turned it into an industrial park. By 1951 there were over 120 base tenants (including the forerunner of North Shore Hospital) employing 3,000 workers with a gross annual business of $65,000,000. In 1952, the base was re-commissioned as a Marine Corps Air Station, but the promises of 6,000 base jobs, a million dollar monthly payroll and an extensive expansion program never panned out except for the construction of an 8,000 foot runway.

Starting in 1954, the CIA used Miami-Opa locka as the headquarters for covert operations, first against Guatemala (successfully) and later Cuba (disastrously). Transfer of the base to the Port Authority was delayed over one year because of its role in the 1961 Bay of Pigs invasion of Cuba. After 1962 the Port Authority began to transfer all general aviation activity from the old Tamiami Airport to Miami-Opa locka and to aggressively recruit new tenants for the facilities. These efforts came to a screeching halt on October 21, 1962 when President Kennedy declared a National Emergency as a result of the Cuban Missile Crisis and reclaimed Miami-Opa locka for use as the Peninsula Base Command for an invasion of Cuba.

After the Soviet Union agreed to remove the missiles from Cuba, the airport facilities were returned to the Port Authority and by 1964 it had become the nation’s third busiest airport. By 1967, Miami-Opa locka was the world’s busiest civilian airport prompting the need for remote auxiliary runways for flight training activity. In 1970, the two remote auxiliary runways at Miami-Opa locka West opened, earning Miami-Opa locka the distinction of being the only reliever airport with its own reliever airport for flight training activity. The fuel crisis and recession of the 1970’s removed Miami-Opa locka from the busiest airport lists. Today the two fields combine to accommodate over 175,000 general aviation yearly operations, such as corporate flights and training exercises.

Through the last forty years many activities not normally associated with airports have taken place at Miami-Opa locka. In 1980, the blimp hangar and several other structures were used to process and house Cuban refugees during the Mariel Boatlift. When Christo came to Miami in 1983 to do his “Surrounded Islands” art project in Biscayne Bay, he leased the blimp hangar to assemble with the help of forklifts the giant pink polypropylene petals that surrounded the bay island. Miami-Opa locka has been a very popular film set, many Miami Vice episodes, and portions of The Flight of the Navigator. Just Cause, True Lies and Holy Man all filmed there. The blimp hangar, sadly deteriorated, was blown up in 1994 for the final sequence of Bad Boys.

On a more serious note, Miami-Opa locka as the airport least damaged by Hurricane Andrew, became the staging point for South Florida’s recovery effort in September 1992. Four years later, the two Brother’s to the Rescue aircraft shot down by Cuban Air Force MIG’s over international waters while on a humanitarian mission, took off from Miami-Opa locka. Elian Gonzalez’s grandmothers flew in on a chartered jet for their meeting with their grandson in January 2000. And finally, in the wake of 9/11, it was discovered that terrorists Mohammed Atta and Marwan al-Shehhi had trained in a 727 simulator at the Simcenter in Miami-Opa locka nine months before the attack.

This report was prepared by Antolin Garcia Carbonell, R.A. who retired in May, 2006 after 30 years with the Aviation Department. 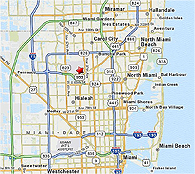